This book should be on the shelf, the nearest handy shelf, of anyone passionate about slowing down and also reversing climate change. Better yet, this book deserves a place on your coffee table. Use it to start hopeful conversations in your living room. Or convene a book club discussion of hope in a coffee shop or restaurant near you.

Our globe, Earth, is on a runaway train ride to getting hotter and hotter if we don’t band together and do something about it. You have probably heard too many depressing stories about the coming runaway global warming. Don’t despair. There is hope. You have probably also had discussions with people saying things like “recycle” or “be green”. Such discussions are good. But they can also be great.

There is hope, real hope to talk about. Get this book. Read it. Re-read it. Discuss it and share it.

Why? A team of sixty research fellows investigate a host of ideas that go well beyond slowing down the moaning about burning too much fossil fuel. The book DRAWDOWN began by asking what are effective things we can do to reverse global warming. That led the research fellows into many investigations. Many discussions tested the potential of effective things to do followed. They quantified the impact of these ideas. The research fellow ranked and found the most impactful ideas. Nine essayists took the top ideas and wrote them up in a very accessible way under the direction of Katharine Wilkinson, Senior Writer. I met her at the inaugural Climate Con a year ago in Asheville, NC. She told me “It’s all about the math…”

And reversing global warming is the math. What math? Global Math about getting together and measuring the best drawdown things we do together. We can drawdown CO2 out of the atmosphere in many surprising ways. This book has eighty ideas ranked in seven categories, plus an eight category (coming attractions) to work on. See for yourself by getting this book and reading it together with your favorite mathematicians. 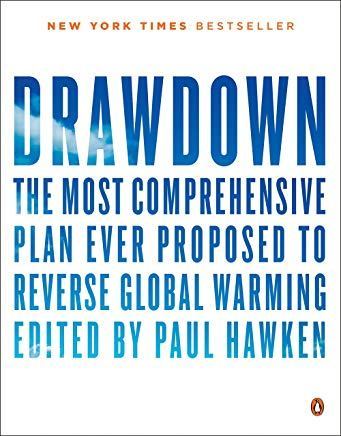